In this guide I'll go over how to setup the Phoenix Framework as our back-end to an Ember.js front-end. We'll use JSON API with Phoenix and Postgres as our DB.

I've been looking around for guides on using Phoenix with Ember and I thought the best way of learning would be writing my own. As I was writing this I found out it was incredibly easy to get something working in Phoenix fairly quickly. The only problems I ran into were getting some of the dependencies setup correctly. After that hurdle I was good to go.

This guide is by no means for advanced users. This guide is a good starting off point in learning Phoenix. It's also good reference material.

If you like to follow along the Ember UI code is on Github. The Phoenix code is also on Github.

What is The Phoenix Framework?

Phoenix is a web development framework written in Elixir that uses a server-side MVC pattern. Elixir is a functional language that leverages the Erlang VM. You don't have to understand Elixir to use Phoenix. However, anything beyond a basic application will require you to learn at least the basics in Elixir. Learning Elixir is beyond the scope of this tutorial however I'll do my best to explain each concept as they come up.

At a high level Phoenix is comprised of several layers. Plugs are reusable modules that Phoenix uses to help define certain behaviors. For example, the request JSON API serializer or logging.

Another important component is Ecto. Ecto is essentially the database wrapper for Elixir/Phoenix. This will handle all the interaction with the database, queries and models of our domain data. We'll take a high level look at this later.

There are many other aspects of Phoenix. Here are some of the other parts of the framework.

You can click on any of the links above to get more information. At a high level data flows this way.

Alternatively channels can be used for real time communication with sockets. Pubsub is used with the channel layer to subscribe to messages. We won't be discussing Channels or Pubsub in this tutorial.

Let's take a look on how to get started.

Before we can begin we'll need to install Elixir. You can check out the install guide on the Elixir site here if you like. This guide will assume you're on Mac or Linux.

After Elixir is installed you'll have access to mix. Mix is a build tool that you'll use to install dependencies and create projects.

Hex is a package manager for the Erlang VM. We'll need it for our project.

Now we can install the Phoenix mix archive. We'll need this so we can use mix to generate our Phoenix application.

Keep in mind that Phoenix has the option of using something called brunch to compile static assets. You'll need to have npm installed for this to work. As always I recommend that you use NVM to install your node versions.

For Mac I would use homebrew or Macports again to install it.

That should be it on the Phoenix side! You can now get started. It might be a good idea to double check things are working. Start the server (mix phoenix.server) and go to http://localhost:4000/api/teachers

Make sure it works!

If you already have Ember CLI installed you can skip this section.

For Ember you'll need to make sure you have Ember CLI installed. That will require node and bower. Once gain I would recommend using NVM to install node first. Then you can install bower.

That should be it! If your upgrading Ember CLI I would check out the ember-cli releases github page for more info!

Let's go ahead and create our Phoenix application.

This will generate the structure of our app and install all the dependencies. Since we aren't going to have Phoenix serve up any of our html we'll use the --no-html --no-brunch arguments. This app will be a pure API back-end.

It's a good idea now to make sure we have our database configured correctly.

This will begin the compilation and create our database. If the database can't be created you may receive a message like this.

You can now fire up the application and make sure it's working.

By default it will be listening on port 4000. You can open up a browser and see it running. Of course nothing is defined so you'll get an error however this will at least let you know it's running.

As I mentioned at the beginning we'll be using JSON API in our Ember and Phoenix app. There is formatter that works with Elixir called JaSerializer.

Install this serializer in your application. First we'll need to add it as a dependency.

Next we'll need to update the config files and add the json api mime type.

Next we'll need to update the router. This will tell Phoenix to use JSON API when accepting requests.

That should be it for the initial setup of the JSON API serializer.

Setting Up The Rest Of The Phoenix Application

Let's create the teacher route and model. We can use mix and the ja serializer generator to do this quickly. It uses the same format as the phoenix json generator.

The model will be called teacher and have two fields, name which is a string and age which is an integer.

You'll notice after running this command a bunch of files are created. This includes the controller, the view, model, a migration for the model and some test files. This will be everything we need for our API to work.

Add a new resources macro into our route.

This opens several new routes under api. The except option removes new and edit from our possible routes. We can take a look at the routes created by running the command below.

The :index, :show, :create are all in the controller. By convention they are mapped to the HTTP requests you see above. Per the controller documentation here is the mapping.

In our app if a user navigates to /api/teachers the index action will be triggered in the controller. The generator has already created the code for us. The index action is displayed below.

This is where learning Elixir and Ecto is helpful. Essentially it's looking at the database, retrieving all the records and passing it to render. The render will check the view and render the json data. Since we aren't using .html it will not use a template. If we started the phoenix server and navigated to /api/teachers we should see all the teacher data.

By the way a great tool to help debugging is the IEx.pry command. It's similar to the Ruby on Rails pry. You just have to add the require IEx and then add in the IEx.pry command wherever you want to debug. When that code is executed the program will stop and and a console will appear for you to start troubleshooting. You have to start the server with iex -S mix phoenix.server for this to work. Check out this great article from @diamondgfx for more info.

Migration File and Seeding the Database

The generator created a migration file. We can run the migration to create our teacher table.

You can take a peek at the model file in the /web/models folder and the migration file in the /priv/repo/migrations. We won't go into details on these files in this guide.

We want to have some data in our database so we can use the seed file to do that.

These are maps that define our data. The Enum.each will insert the data into the database.

Once again we use mix to run the file.

Before we are done with the API, let's add in a plugin to allow for cross origin requests. If we happen to have different host names between our UI and API we want to make sure it'll work.

First add the CORS plug to the mix file in the deps section.

Then add it to the endpoint above the router at the bottom.

That should be it for our API!

To keep things really simple all we want to do is connect to our API with the default JSON API adapter and retrieve the teacher data. Then we'll display it to the user.

This will create the scaffolding for the Ember project, the router and the model.

Edit the application route and have it return the teacher model

By convention the findAll will trigger a HTTP GET to the server at /teacher using the JSON API adapter.

Now we should have access to the model in our index template file. Let's see if we can edit the hbs file so we can display the data we retrieved.

As you can see this is a really simple example. We are just using the Ember each helper to iterate through the model data and display it to the user.

Putting it all together

For now we won't go over actually deploying the application. I'll leave that for another day. Let's start the Phoenix server first and proxy over the Ember app so it can talk to our API.

This should start the phoenix server on port 4000.

This will proxy all requests to the server to localhost at 4000 (pxy is an alias for --proxy).

Fire up a browser and navigate to port 4200. You should see this screen. 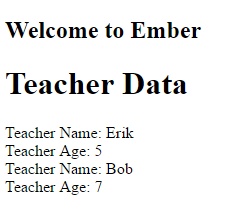 If you're looking for more Phoenix tutorials check out these sites. They were helpful in making this guide.

It's been really helpful in my learning.

In this tutorial we created a Phoenix back-end with a teacher end point that sent over JSON API. We then created an Ember UI front-end that retrieved that JSON API data and displayed it to the user.

If your interested in Phoenix or Ember sign up below to get a free Ember cheat sheet! Thanks for reading!